Astilbe: A Gem in the Shade Garden 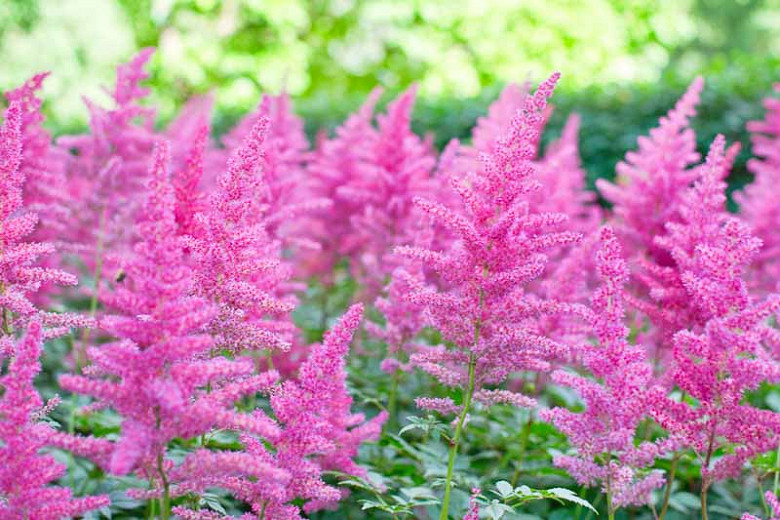 Immensely popular, Astilbes are fabulous plants for shady, moist conditions. They light up your shade garden for weeks with their elegant flower plumes and add a dazzling splash of color to the landscape. Ranging from 6 in (15 cm) to 24 in. tall (60 cm), their feathery plumes, in shades of lavender, pink, red, or white, can be incredibly striking. They rise gracefully above attractive mounds of fern-like foliage which remains attractive all season long (under satisfactory growing conditions) before turning progressively a rich caramel color which provides winter interest to the garden. Astilbe chinensis var. tarquettii 'Superba' growing next to the Lily Pond at The Courts Garden, Wiltshire. If unsure which Astilbe to select for your garden or containers, here is a list of favorite Astilbe varieties among gardeners. If acclaimed by others, you cannot go wrong!

Astilbe 'Sprite' (Simplicifolia Hybrid) is a popular choice with gardeners thanks to its airy, shell-pink flowers which open even in heavy shade. This dwarf Astilbe is particularly suited to outdoor containers and won the 1994 Perennial Plant of the Year Award as well as the prestigious Award of Garden Merit of the Royal Horticultural Society. Blooms in mid-late summer and grows up to 12-18 in. tall (30-45 cm).

Astilbe chinensis 'Pumila' is a low-growing Astilbe that makes an attractive groundcover. Winner of the Award of Garden Merit of the Royal Horticultural Society, it displays fluffy, rich, lavender-purple flowers in late summer. Grows up to 12-18 in. tall (30-45 cm).

Astilbe chinensis 'Vision' is another Astilbe variety that is admired by many gardeners for its upright, thick pyramidal, slightly fragrant flower plumes in shades of raspberry pink, deep red, or white. Blooms in early-mid summer over a deep bronze green foliage and grows up to 18 in. tall (45 cm).

Astilbe 'Rheinland' (Japonica Hybrid) is another popular variety with its clear pink flowers borne on upright, reddish stems in early-mid summer. Winner of the Award of Garden Merit of the Royal Horticultural Society, it grows up to 12-24 in. tall (30-60 cm).

Astilbe 'Bridal Veil' (Arendsii Hybrid) is a reliable and free flowering Astilbe with luminous, dense, ivory-white flower plumes in late spring - early summer, which stand out in the night garden. Winner of the Award of Garden Merit of the Royal Horticultural Society, it grows up to 28 in. tall (70 cm).

Great Bulbs and Perennials as Companion Plants for Azaleas and Rhododendrons

Since most Azaleas and Rhododendrons provide colorful...

A Pastel Border Idea with Astilbes, Hemerocallis and Geranium

This soft plant palette of pastel colors can be enjoyed...

A Pretty and Long-Lasting Garden Idea with Outstanding Plants

This fascinating border has been created by landscape...

Mid-Season Astilbe Varieties For Your Garden

To help you plan your late spring or summer garden and...

Extend the Blooming Season of Your Astilbes

A Pretty Pathway with Grasses and Charming Perennials

A beautiful combination of ornamental grasses and...

Splashes Of Colors For My Shady Garden

A stunning border for shady gardens. Created by Carter...

To help you plan your late spring or summer garden and...

A Striking Border with Astilbes and Grasses

For summer to fall exquisite beauty on easy care plants,...