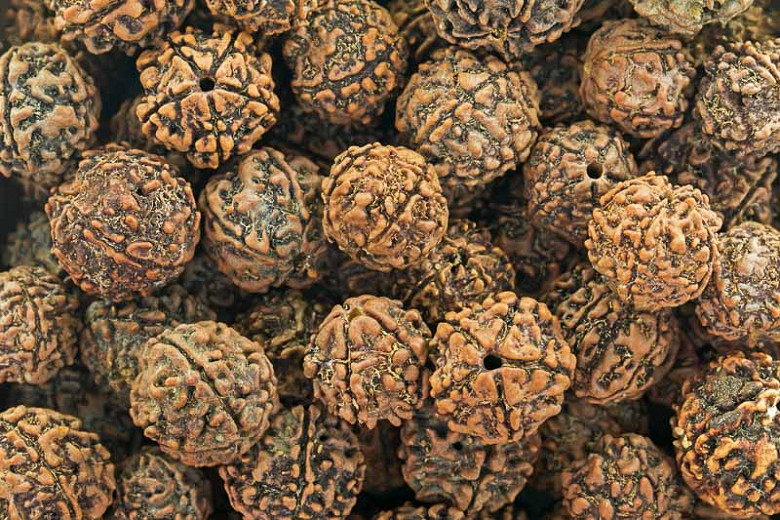 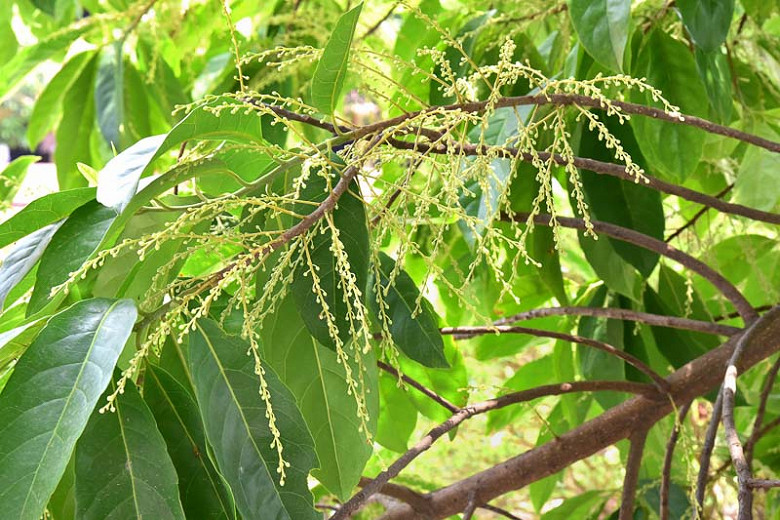 Prized for its blue seeds, Elaeocarpus ganitrus (Rudraksha Tree) is a large evergreen tree adorned with a spreading handsome crown of shiny, green, oblong leaves. The trunk is rough textured, cylindrical, and grayish-white. As the tree matures, it is usually buttressed at the base with its roots radiating out along the surface of the ground. Dense racemes of tiny white flowers with fringed petals appear in spring, mostly from the axils of the fallen leaves. They are followed by small, round or oval, violet, or blue fruits that are acidic in taste. They contain hard seeds (beads) and are known as blueberry beads. Rudraksha beads are one of the most sacred of all Hindu insignia and are often described as tears shed by Lord Shiva for the benefit of humanity. Traditionally Rudraksha is also used in the treatment of hypertension, anxiety, epilepsy, migraine, depression, palpitation, nerve pain, asthma, arthritis, and liver disease. Fast-growing, Rudraksha is valued for its timber. Its main use, however, comes from the seeds or beads that are generally worn by people on their wrists, forearms, or neck. The wearing of Rudraksha is believed to bestow psychic powers, good health, and prosperity to the individual.

Tolerant of extreme heat and cold, all these plants are...

A Sparkling Mediterranean Garden with Aloe, Agave and Palms

A colorful, vibrant, yet low maintenance way to ornate your...

A Sparkling and Low Maintenance Garden

As if studded with diamonds, Elegia tectorum provides a...

This warm and eye-catching Mediterranean border is a real...

Terrific at adding texture, color, and shape to the...

How many Elaeocarpus ganitrus (Rudraksha Tree) do I need for my garden?