How To Choose The Right Flowering Crabapple for Your Garden

Among the most prized of ornamental trees, flowering crabapples have long been a staple of landscape gardening. They are best known for their spectacular display of magnificent blooms in spring and colorful fall fruit. Their summer foliage, small stature and various tree shapes add to their charm and give them year-round interest.

Most gardeners are unaware of the wide range of characteristics offered by Malus species and their cultivars in terms of flower color, fragrance, fruit color, fruit retention, fall foliage, tree shape, and disease resistance. These are key elements to consider when selecting a flowering crabapple. Consequently, you should not eliminate varieties merely by flower color alone, or you may end up with a less than optimum tree with limited interest.

In the springtime, crabapples unfold their deep carmine, red, pink, or white buds and explode in a spectacular display of clouds of white, cream, pink, magenta, red, burgundy, red-orange and orange-coral. Often the combination of rich red buds opening to pure white blossoms adds to the sheer beauty of the floral display

Many crabapple blossoms are delightfully fragrant but some are not. Some have the wonderful fragrance of apple blossoms, others have an exotic Oriental fragrance resembling cinnamon or cloves. Among the most fragrant crabapples are Malue coronaria, Malus ionensis, Malus coronaria 'Charlottae', Malus Brandywine, Malus Madonna, Malus Satin Cloud. 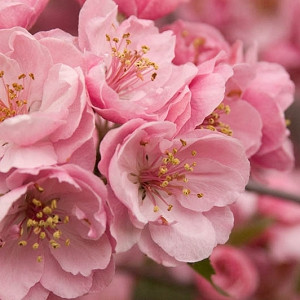 From fall into winter, crabapples put on a terrific display of colorful fruit in a wide array of color, including pale lime, chartreuse with yellow highlights, various shades of gold often rouged with pink, orange or bright red cheeks, bright orange, crimson, carmine, burgundy or even bishop's purple. Their color parade can be enjoyed for months unless hungry birds feast on them. 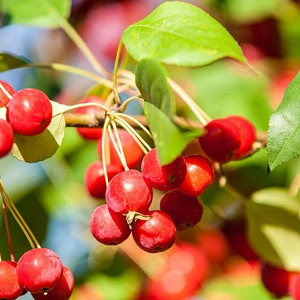 Crabapple trees develop a thick canopy of ovate, oval or elliptical leaves in summer. Their lush foliage may be bright green, dark green or purple. In fall, many varieties clothe themselves in brilliant color, including golden-yellow, red, orange or bronze, before shedding to the ground. When the leaves fall, they reveal the glorious color of the fruit covering the branches. You can almost see the birds drooling in anticipation of the feast to come.

Another great asset of the flowering crabapples is the wonderful variety of tree shapes. Most are upright of rounded and spreading habit but there are also columnar, vase-shaped or weeping varieties of great beauty. 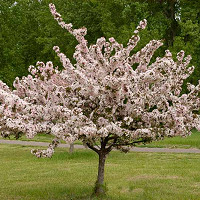 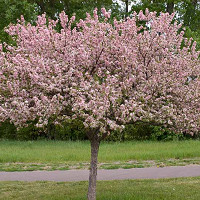 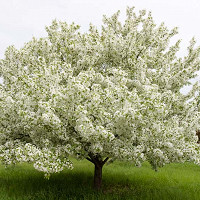 Last but not least, you need to make sure you select a healthy, disease resistant crabapple. Crabapples are susceptible to four major diseases which can cause early defoliation, disfigurement and weakening of trees.

Breeders have been busy improving the disease-resistance of flowering crabapples and there are many disease-resistant cultivars available. However, it is important to note that there may be significant regional differences in disease resistance – a cultivar that performs well in one area may do poorly in another. This just goes to show the importance of choosing cultivars well suited to particular climates.

To help you select the best flowering crabapple for your yard, we have compiled lists of varieties and cultivars that consistently perform well per geographic area .

You may want to review these useful guides too

Spectacular on their own, flowering crabapples can hold...

Among the most prized of ornamental trees, flowering...

Among the most prized of ornamental trees, flowering...

From fall into winter, crabapples put on a terrific display...

Malus hupehensis (Tea Crabapple) is listed in the Invasive...

A Beautiful Fall Border Idea with Dahlias, Verbena and Grasses

The Pacific Northwest may not be the best place to enjoy...

One of the most stunning variegated trees, Cornus...