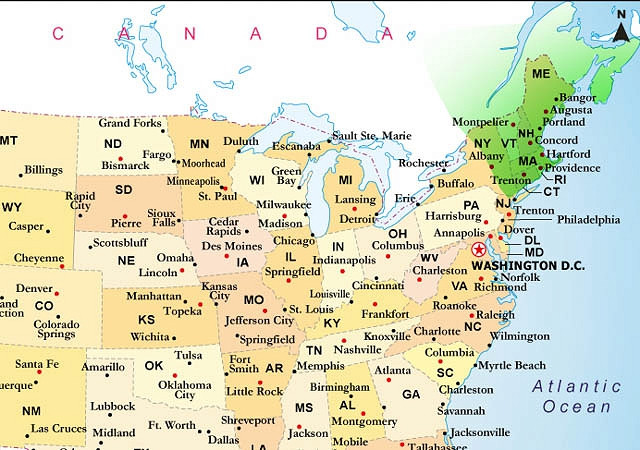 New England typically includes the states of Connecticut, Massachusetts, Rhode Island, Maine, New Hampshire, and Vermont. From a climate standpoint, in relation to gardening, the New England region has been extended by the National Gardening Association to include eastern upstate New York, southern Ontario, southern Quebec, and the Maritime Provinces of Canada.

According to this map of New England, the region lies in USDA Plant Hardiness Zones 3 through 7 and in AHS Heat Zones 1 through 3. Weather varies dramatically from state to state and season to season. However, generally speaking, this region enjoys 4 distinct seasons characterized by short springs, hot and humid summers, along the coasts but cool in the mountains, cool falls, and long and harsh winters with heavy snow and sometimes ice storms.

The frost-free growing season ranges from 120 to 180 days with the last frost dates ranging from April end (along the coast) to early June (in the mountains) and the first frost dates starting as early as September until the end of October.

Selecting plants suited to the diverse New England climate will be a key step to success.

Based on the minimum ten-year average winter temperatures, plant hardiness zone maps have been progressively developed, first by the Department of Agriculture (USDA) for the United States and then more or less applied to the rest of the planet. The purpose of these hardiness zones is to identify how well plants will withstand the cold winter temperatures of these zones.

The USDA Hardiness Zone Map divides North America into 13 zones of 10°F each, ranging from -60°F (-51°C) to 70°F (21°C). If you are planning to buy a shrub, perennial, or tree, you need to make sure that this new plant will tolerate year-round conditions in your area. Therefore, to ensure your new acquisition will survive and grow year after year, you will need to compare the hardiness zone of your area with the hardiness zone of your plant (included in most American reference books, nursery catalogs, and gardening magazines describing plants).

Keep in mind, however, that this USDA map is mostly a guideline. While the USDA map reflects pretty well the garden climates of the eastern half of North America, it does not factor in any elevation or precipitation which has quite an impact in western climates. It does not include microclimates, humidity, or summer heat tolerance either.

To partly resolve some of the above issues, a Heat Zone Map has been developed by the American Horticultural Society, based on the National Weather Service (NWS) daily high temperatures recorded between 1974 and 1995. While the effect of heat is not as immediate and radical as severe cold, it may slowly damage your plants and kill them. The most obvious heat symptoms include withering flower buds, drooping leaves, leaves discoloration (leaves may turn white or brown), or non-growing roots.

The AHS Plant Heat Zone Map includes 12 zones, each indicating the average yearly number of days with temperatures over 86°F (30°C). This threshold represents the point when the plants start suffering from heat. These Heat zones range from less than one heat day (Zone 1) to more than 210 heat days (Zone 12). Similarly to the hardiness zones, most garden plants provide heat tolerance information. Therefore, you will find 4 numbers on each plant: Maximum Hardiness Zone, Minimum Hardiness Zone, Maximum Heat Zone, and Minimum Heat Zone. For example, a tulip may be 3-8, 8-1. If you live in USDA Zone 7 and AHS Zone 7, you will know that you can leave tulips outdoors in your garden year-round. An English wallflower may be 5-8, 6-1. It is relatively cold hardy, but can't tolerate extreme summer heat.

Again, this Heat Zone map should be used as a guideline and gardeners may find that many plants will survive outside their respective heat zone. The reason is that other factors could have an impact on the life of your plant such as a lack of water (resulting from the heat), light (cloud cover, dappled shade), day length (the longer the summer day, the more impact on plant survival), air circulation (fast-moving air on hot days may quickly dehydrate the plants), surrounding elements (hard structures of stone, concrete) emit heat, raise the air temperature and soil pH.

3 Charming Beauties For Your Spring Borders

Easy to replicate at home!

Plant bulbs in the fall starting when nighttime...

What a lovely outdoor space with the elegant white pergola...

A Glowing Spring Border Idea for Your Garden