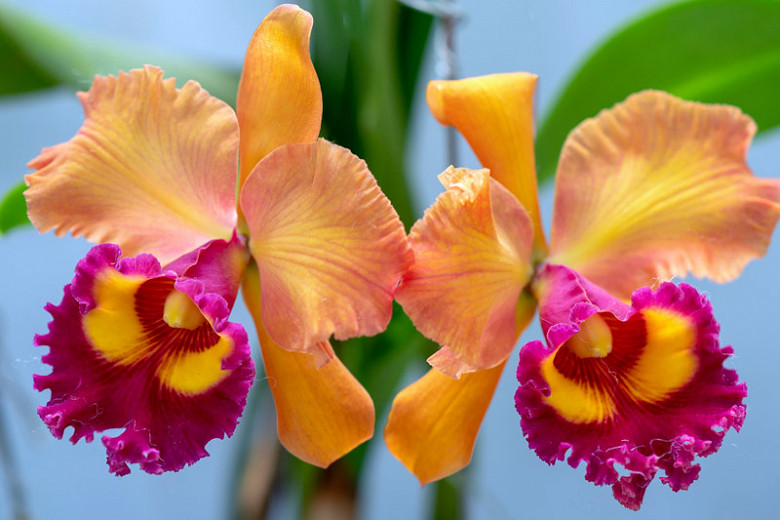 Cattleya Orchids are among the most popular and easy-to-grow orchids. Epiphytes (growing on trees) or lithophytes (growing on rocks), they grow from pseudobulbs which are food and water-storage organs. Native to Central and South America, they include about 50 species and numerous hybrids in a variety of colors.

They are divided into two groups, the unifoliates, which have one leaf and large flowers, and the bifoliates, which have two leaves per stem and smaller flowers. Both types are very fragrant with showy flowers appearing on naked stems and lasting 4-8 weeks. These orchids have been nicknamed Corsage Orchids, Queen of Orchids, or King of Orchids.

Light
Bright light to some sun should be given to the plant, with no direct sun in the middle of the day. East, shaded south, or west-facing windows are all suitable positions. Leaves should be a medium green color, pseudobulbs erect and require no staking.

Temperatures
Cattleyas are generally considered cool to warm orchids. They require a minimum night temperature of 55-60°F (12-15°C) and a daytime temperature of 70-85°F (21-29°C). They tolerate up to 95°F (32°C), if humidity, air circulation, and shading are increased.

Water
Water thoroughly in the morning, so that by evening the roots could dry out relatively well. Place the potted plant in a sink and allow water to flow freely through the potting medium and foliage. Mature cattleyas need to dry out thoroughly before being watered again. Seedlings need more constant moisture. Plants in active growth need more water than plants that are resting.

Humidity
Cattleyas enjoy moist air, requiring a minimum of 50-80% humidity. In the home, placing the plants in a tray of damp pebbles is ideal.

Fertilization
During the growing season, feed at least every two weeks with a balanced fertilizer. If grown in fir bark, use a high-nitrogen fertilizer. When not in active growth, feed once a month.

Potting
Repotting should be done when the rhizome of the plant protrudes over the edge of the pot or the potting medium starts to break down and drain poorly. It is best to repot just before new roots sprout from the rhizome, after flowering, or in the spring. Use a coarse, fir bark-based orchid potting medium.

Repot as needed (approximately every two years) in spring or just before new roots sprout from the rhizome, using a coarse, fir bark-based orchid potting medium. Repotting is needed when the rhizome of the plant protrudes over the edge of the pot or when the potting medium breaks down and drains poorly. When dividing the plant, retain three to five of the younger pseudobulbs (stems) and place the cut rhizome against the side of the pot.

Propagation
Propagate by division when the plant overflows the pot. Make sure you have at least 3-5 pseudobulbs in each division.