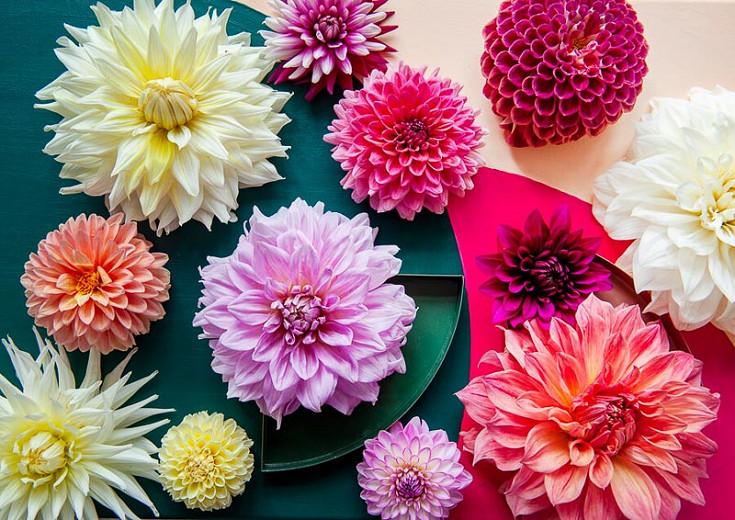 The rich variety of their flower colors, shapes, and sizes added to their extensive blooming season, have turned dahlias into a popular addition to our landscapes. There are thousands of varieties of dahlias (!!!) and they are all classified by the shape, size, and color of their flowers.

Flowers can be as small as 2 inches in diameter or up to one foot. They offer an impressive range of colors such as pink, purple, red, scarlet, orange, yellow, and white, and can be stripped or tipped with another color. They can be single-flowering (orchid-flowering, anemone, and collarettes) or double-flowering (cactus, semi-cactus, formal or informal decorative dahlias, balls, and pompons).

Their wide height range can start as low as 12 inches and go up to 6 feet.

They thrive in full sun, and prefer well-drained, sandy soils, although they can grow nicely in heavy clay soils - but adding some sand or peat moss would be a good idea. Tender bulbs, dahlias are hardy to USDA Zone 8 where they can be cut back and left in the ground to overwinter. In colder areas, they will have to be lifted after the first harsh frost and stored over the winter.

Both types have double flowers with long pointed ray petals that revolute or roll back along half their length, giving the flowers a spiky look. Most cultivars reach a height of more than 40 inches.

These are double dahlias with broad, flat-tipped petals that are sometimes wavy. The flowers are normally large and the plants easily top 40 inches tall, though there are even taller varieties. They can be formal with flat petals evenly and regularly placed throughout the flowers, or informal with generally flat petals, sometimes slightly rolled at the tips, but with irregular arrangement of formation.

Pompon and Ball Dahlias feature relatively small, fully double, globe-shaped flowers with petals blunt or slightly rounded at their tips. How not to marvel at the perfect petal arrangement of these dahlias? They display an infinite swirl of florets with fold upon fold of incredibly flawless petals.

See all Pompon and Ball Dahlias

See all Anemone and Collarette Dahlias

Single Dahlias feature blooms with a single row of flat or slightly cupped ray florets arranged in a flat plane, uniformly overlapping, preferably in the same direction with no gaps. The disc flowers may have up to three rows of bright yellow or orange pollen and the blooms are over two inches in diameter (5 cm). Pollinators love these Single-Flowered Dahlias! If you want to provide something special for bees, butterflies or other pollinating insects still active in late summer of fall, choose a Single Dahlia!

Mignon Dahlias possess the same formation as Single Dahlias except they have round ray floret tips, their disc flowers have no more than two rows of pollen and their blooms are under two inches in diameter. Perfect for small gardens or container display, Single Dahlias include the highly prized Dark-Leaved Dahlias with their masses of stunning flower colors which contrast strikingly with their deep mahogany to black foliage. Effect in the garden guaranteed!

See all Mignon and Single Dahlias

Peony Dahlias are open centered flowers with two or more rows of petals surrounding a disc. For many years the most popular Peony-flowered dahlia was a cultivar called D. ‘Bishop Llandaff’, an heirloom variety that dates back to 1927. It has open deep-red flowers with nearly black, mahogany foliage.
Orchid Dahlias are also open centered flowers with one ray of florets surrounding a disc (Single Orchid) or a fully double bloom showing no disc (Double Orchid). The florets involute for two-thirds or more of their length.

See all Peony and Orchid Dahlias

This diverse group includes all varieties that do not fall into one of the above groups.

Not sure which Dahlia to pick? Compare all Dahlias

Learn how to plant, grow and care for Dahlia flowers and add a bright pop of summer color to your garden
Read More

You may want to review these useful guides

Dahlias are absolutely breathtaking flowers. Flowering for months, they inject color and drama wherever you grow them: in mixed borders in the garden, in containers or window boxes on balconies, and on patios. 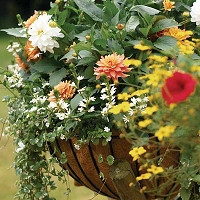 For containers and low borders, the best choices are the shorter dahlias with more compact shapes. Keep well watered and place in full sun. You can count on these powerhouses to produce abundant blooms from summer through fall – with some producing up to 40 flowers per plant! 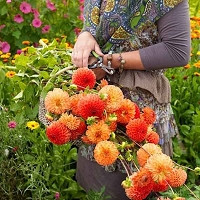 Dahlias are absolutely breathtaking flowers. They are widely available in such a huge range of intense colors that they can be used in any setting. All dahlias make tremendous cut flowers – the more you cut them, the more they bloom! Still, some are considered superstars. 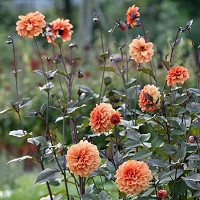 These unusual dahlia varieties are really worth mentioning and should not be overlooked by the gardener. Why? Because these beauties offer masses of stunning flower colors that contrast strikingly with their deep mahogany-to-black foliage. Effect in the garden guaranteed! Here is the roster of these most popular beauties. 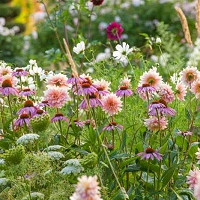 Injecting color, drama, and late-summer fireworks in the garden, dahlias look fabulous on their own or combined with other plants. Many are graceful and integrate well into most borders, creating appealing planting combinations and providing interest from mid-summer until the first frost. 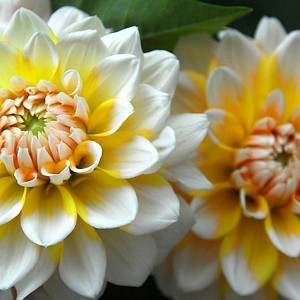 The flowers of Dinner Plate Dahlias make quite an impression! They are unbelievably large - up to 12 in. across (30 cm) - and will bloom continuously from July until the first touch of frost

Not sure which Dahlia to pick?
Compare All Dahlia Great Plant Combination
Ideas with Dahlia Guides with Dahlia 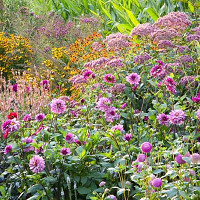 How not to marvel at the color, beauty, and arrangement of this summer border which can also be... 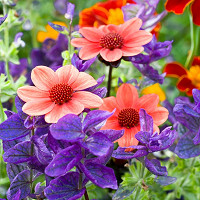 Create a beautiful garden with this colorful and long-lasting plant combination idea that will... 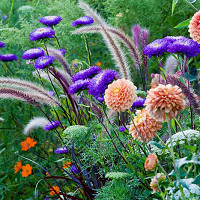 This desirable and long-lasting summer border is fairly easy to replicate in order to be enjoyed at... 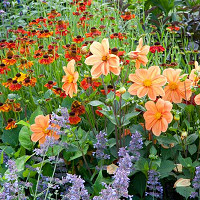 How not to marvel at the color, beauty and arrangement of this summer border that can also be... 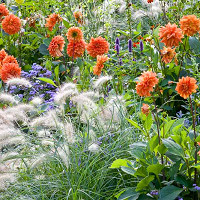 Not sure which Dahlia to pick?
Compare All Dahlia Great Plant Combination
Ideas with Dahlia Guides with Dahlia

Learn how to plant, grow and care for Dahlia flowers and...

These unusual dahlia varieties are really worth mentioning...

Injecting color, drama, and late-summer fireworks in the...

A Hot Border Idea with Achillea, Hemerocallis and Grasses

Awash with colors and shapes from early to late summer,...

Dahlias are absolutely breathtaking flowers. They are...