How To Choose The Right Wisteria 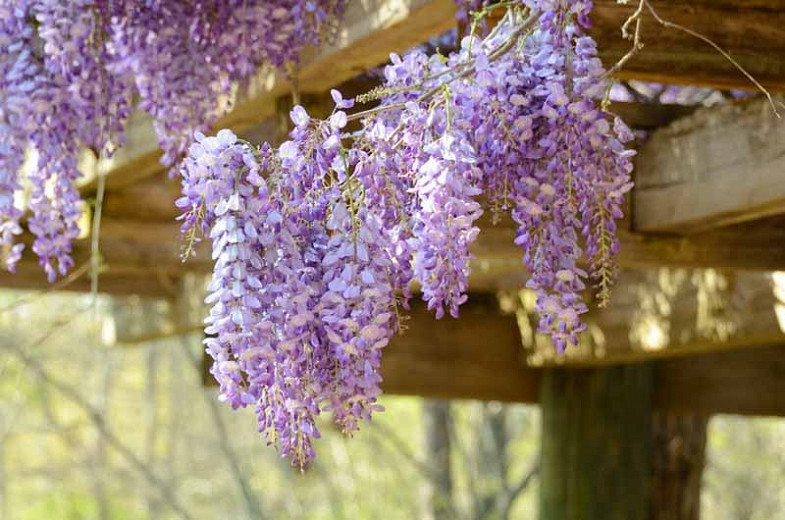 The beauty of the pendulous racemes hanging down to form a colorful curtain of scented flowers in spring and summer, the elegant foliage, the fascinating drooping seed pods, the fall colors of most varieties, and the attractive gnarled trunks and twisted branches in winter, make Wisteria one of the best ornamental vines.

Most gardeners are unaware of the wide range of characteristics offered by Wisteria species and their cultivars in terms of bloom season, fragrance, length of flower clusters (racemes), flower colors, and fall foliage. Consequently, one can not eliminate varieties merely by color alone.

Moreover, Wisterias are slow to establish. It might be far more satisfying to buy a variety known to produce flowers early, regardless of color or size of bloom, rather than to wait years for the plant to produce its first flowers. Go for named varieties propagated from cuttings, buds, or grafts. They will start blooming within the first couple of years after planting. Avoid buying seedlings as they may take 10 to 20 years to bloom.​

Wisteria with the strongest Fragrance

All Wisterias are scented. Some varieties release a musky fragrance while others exude a sweet scent. Their fragrance ranges from faint to strong to almost overpowering. Most of the cultivars of Wisteria floribunda, Wisteria sinensis, and Wisteria brachybotrys are noted for their delicious scent. Among the most richly fragrant cultivars are 'Murasaki Kapitan' (sweet), 'Okayama' (sweet), 'Shiro Kapitan' (sweet),  'Kuchi-Beni' (musky), 'Lawrence' (sweet), 'Royal Purple' (sweet) or 'Jako' (musky).

The length of Wisteria racemes is an important factor to consider when buying.

Here is a list of Wisteria cultivars organized by their raceme lengths.

Wisterias are deciduous climbers. Despite the fact that they lose their leaves in the fall, some varieties and cultivars reward us first with brilliant golden-yellow foliage before falling. Most Wisteria floribunda display attractive fall colors, but 'Violacea Plena' is by far the best with its foliage turning butter-yellow.
A few other cultivars are also displaying remarkable fall colors such as 'Rosea', 'Kuchi-Beni', 'Lawrence', 'Macrobothrys', or 'Royal Purple'.

If you are still undecided about which species or cultivar to select for your garden, you may want to review the most popular Wisteria varieties or those rewarded with prestigious awards.

A Super Climbing Duo with Clematis montana and Wisteria

Clematis and Wisteria can be perfect companions. They can...

Wisterias are vigorous, deciduous climbers that need a...

If you are not sure which species or cultivar to select for...

If you wish to cover a wall, while most wisterias would be...

If you wish to cover a pergola, the best effect will be...

Wisterias are available in a wide range of color ranging...

Wisterias are deciduous climbers. Despite the fact that...